Synonymous with motorsport, long-term backers Mobil 1 and Holden Special Vehicles (HSV) have come together to share the naming rights of Supercars’ most prestigious race team.

The joining of these two iconic brands and Walkinshaw, form the powerhouse trio behind the new Mobil 1 HSV Racing team. This launch marks a new era in the team’s long and prestigious history in Australian motorsport, and Team Owner Ryan Walkinshaw says the team’s relentless passion for success is as fierce as ever.

“We have two of the most recognisable and longstanding partners in the sport – Mobil 1 and HSV, who have come together as the naming rights sponsors of our new team.“Together with the extensive expertise in the Walkinshaw garage, we believe we are in a perfect position to kick-start our new chapter.”

The new team will share the major branding positions of the car through a rotational partnership model that delivers a range of unique liveries throughout the season including the launch livery presented today. “Today I am proud to reveal our stunning launch livery which features Mobil 1 and HSV branding.”

Walkinshaw Racing has a proud 26-year history in Australian motorsport which includes eight Driver Championship wins, seven Team Championship wins, nine Bathurst 1000 wins and 212 race wins. Both Mobil 1 and HSV have shared in all those wins under the Walkinshaw banner.“For many years the iconic Mobil 1 brand has remained a technology partner of the Walkinshaw Racing team, and in conjunction with our authorised lubricant distributors in ANZ we are very excited to further enhance our relationship with the team for 2017” said Mobil Motorsport Manager Australia, Colin Smith.

Holden Special Vehicles CEO Tim Jackson says for HSV this partnership allows us to perform under one banner, as one team.

“HSV’s are performance vehicles bred from the race track, so aligning more closely with the race team provides a way for our passionate HSV fans to be a closer part of who we are, at all levels of performance,” said Jackson.

As announced in 2016, Mobil 1 HSV Racing also boasts a strong driver line-up including James Courtney and Scott Pye. Returning for the endurance season are Jack Perkins, who will team up with Courtney for a third consecutive year, and Warren Luff who will pair with Pye for the first time.Walkinshaw veteran and 2010 Supercars Championship winner James Courtney is entering his seventh year with the team and said the dedication and passion of the Walkinshaw fans is a significant part of why he loves the Walkinshaw team.

“Our fans have such a strong connection with us that it doesn’t matter whether we carry a new name or wear different colours, they know our goal is to win races. “It’s their team, it’s their journey and I want to be bringing that team back to the glory days.

“This has been my home for so long and I can’t wait to give our loyal supporters who have stood by us something to cheer about this season,” said Courtney.New-recruit Scott Pye says it’s an exciting time to be joining the team and he is particularly excited about being part of their new direction.

“It’s going to be a huge year for Mobil 1 HSV Racing. I have seen how deep the passion for this team runs in our supporters, our partners, and our crew, and it feels really good to be part of that environment,” said Pye.Mobil 1 HSV Racing will take to the track for the first time at the Supercars test day at Sydney Motorsport Park, 21 February 2017. 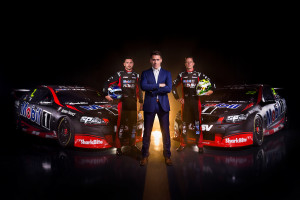