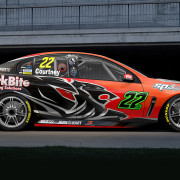 The Holden Racing Team has released official renderings of its new livery that V8 Supercars champion drivers, Garth Tander and James Courtney will carry during the team’s 2016 V8 Supercars campaign.

HRT also launched its 2016 season by confirming its full driver line-up for the year, with Warren Luff and Jack Perkins returning to partner Tander and Courtney in the annual endurance races after successful campaigns last year.2016 will also be the sixth season for the Tander/Courtney partnership, becoming the longest serving driver line-up in HRT history.

Hughes said he was proud to have delivered his 14th regular season livery for the official factory team, one that will quickly be identified as distinctly HRT.“We have focussed on adding fresh, simplistic detailing to the 2016 Holden Racing Team livery, while using the colour ways of last year’s commemorative ANZAC livery to inspire the new car for this season,” Hughes said.“We have also added a darker, more aggressive front-end appearance, and that delivers an unmistakeably strong message from the team.“Hopefully that translates to a strong, clean character for race fans at the track, and for those watching them race on the TV at home.”

Tander said he was looking forward to a new season, his 18th full-time year in V8 Supercars.“I’m extremely optimistic about the year ahead,” Tander said. “We ended 2015 with a lot of strengths – our race pace, strategy and tyre life were very good, but we were also well aware of our weaknesses.“The focus during the break has been on making improvements in certain areas – in our qualifying speed and our set-up for flowing circuits.“We’ll test those areas next week and then look to begin the year on a strong note at the Clipsal 500, then carry that through the season.”

Courtney said he was looking forward to a full season, having missed three events – Eastern Creek, Sandown and Bathurst – after being injured in a well-publicised freak accident.“I’ve been criticised for making rash claims, saying we intend to win races, but if you don’t have the intention to win then you’re in racing for the wrong reasons,” Courtney said.“Our goals are always to better ourselves as a team and overcome our flaws, and that’s what brings results.”Courtney said he was proud to be partnering Tander for a sixth season, a team record.“

Some people in the paddock were wishing we were going to be V8’s version of Senna and Prost, but it’s been nothing like that,” Courtney said.“Sure, we’ve had a couple of scraps, that happens when you’re competitive people racing hard at the front of a pack, but we like working together.”

Luff returns for this third straight enduro campaign alongside Tander, the pair taking out the prestigious Pirtek Endurance Cup last year with consistent performances in the Sandown 500, Bathurst 1000 and Gold Coast 600.“I’m excited to be back for my third year with HRT; it was a childhood dream of mine to drive for the Holden Racing Team, so I’m excited to be back,” Luff said.“Driving with GT has been a lot of fun and we’ve enjoyed some good success together, standing on the podium last year at Bathurst and the Gold Coast and winning the Endurance Cup are highlights.“I’m hopeful we can enjoy even more success, and getting a Bathurst win is at the top of our list.”

After scoring his maiden V8 win with Courtney on the Gold Coast, and filling in for him in the #22 HRT Commodore when Courtney was injured, Perkins is excited to be back with the team.“It goes without saying that I am pumped to be back with the Holden Racing Team and back driving with James in the Enduro Cup,” said Perkins. “Hopefully I’ll actually get to do all the races with him this year.“Last year, in the two races we did do together we finished fifth and first, so I’m look forward to building on those great results.”

Long-time loyal sponsors, HSV, SP Tools, Morris Finance, NGK, MTAA Super and John Hart all return, as does lubricants partner Mobil 1 which enters its 24th year with HRT. Monster Energy Drinks’ famous green claws also adorn the HRT Commodores for a second straight year, with a Monster-themed HRT merchandise range having been designed to broaden the team’s audience even further. The Holden Racing Team is ready put the bite on its opposition – a SharkBite in fact.