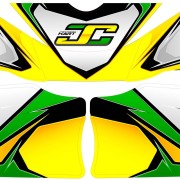 Holden V8 Supercars star, James Courtney is set to pass on the experience of his youth and support the next generation of racers by launching his own line of go-karts under the JC Kart banner.

Courtney is a two-time CIK-FIA World Karting Champion, having won the 1995 World Junior Karting Championship held at Braga in Portugal, and the Senior title in Salbris, France, just two years later. He remains the only Australian to have won a world karting title at any level.

The 2010 V8 Supercars Champion and factory Holden Racing Team driver has teamed with former mentor Jon Targett to bring the brand to market, with the first JC Kart to be unveiled next month.

Designed in conjunction with Courtney and Targett, and manufactured in Italy, JC Karts will offer a line of models covering the entire range of go-karting categories, from Cadet to the CIK-FIA classes.

“I cannot explain how excited and proud I am launching JC Karts,” Courtney said.

“Karting is the foundation for all motor racing – it is not only a fun and exciting sport, but is also where so many of today’s champions began their careers.

“I have many great memories of my time karting, and for the past few years have been kicking around the idea of how I could again become involved and give something back to it – and JC Karts is the result.”

Courtney said Targett’s involvement has been crucial in the launch of JC Karts.

Targett is considered one of the world’s best kart drivers and mentors, having raced and beaten former F1 stars Jarno Trulli, Giancarlo Fisichella, Jan Magnussen and Jos Verstappen, before guiding the likes of Courtney and former V8 driver David Besnard.

“When the idea of building my own brand was floated there was no one that I wanted more to be a part of JC Karts than Jon,” Courtney said.

“Not only was he a great driver in his own right, and an advisor to me in my early career, but Jon was also instrumental in the success of the Top Kart and Energy Corse brands.”

For JC Kart enquiries, email info@jamescourtney.com.au or your local dealer.