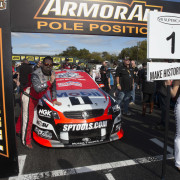 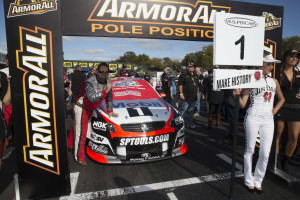 The Holden Racing Team returned to the V8 Supercars Championship podium with James Courtney scoring a second place finish in the first of today’s 100km races at the ITM 500 Auckland at Pukekohe.
After gaining pole position during the first of the two qualifying sessions, Courtney made a good start to race 11 but was unable to hold onto the advantage into the first turn moving into second place and maintained his position for the remainder of the race.
On the other side of the garage, teammate Garth Tander registered the 11th best time of today’s first 10 minute all-in qualifying dash. Tander then raced hard to finish the #2 Commodore with ninth place honours.
Qualifying for race 12 of the ITM 500 Auckland saw a late red flag stop proceedings with one minute and 20 seconds remaining on the clock. At the front of the queue Tander left pit lane with a last ditch effort to record his quickest time for the session by immediately registering a strong fifth place, whilst Courtney retained the 11th position time he was in, prior to the broken session.
From that point, Tander managed to maintain his track position despite fending off late race challenges from Reynolds and was pleased with his Commodore’s overall performance. Courtney finished the day in race 12 in 12th position.
The 2014 V8 Supercars Championship continues this weekend in Barbagello.