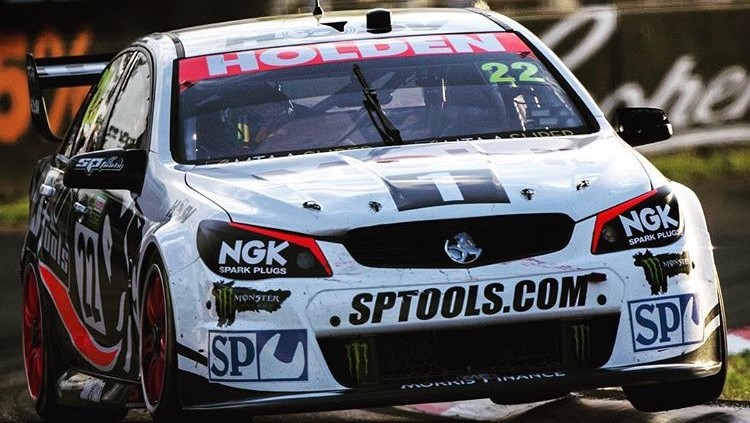 It was a nail biting finish to today’s final race at the Townsville 400 with James Courtney blazing home to finish in 2nd and Garth Tander just narrowly missing the podium in 4th.

Today’s racing schedule consisted of Qualifying, a Top Ten Shootout and the showcase 200km race around scenic Reid Park.  Like yesterday, qualifying was tight with Garth missing the shootout by just one position, clocking the 11th fastest time.  While James’ lap time was only seven hundredth of a second behind his teammate, he qualified back in 16thposition on the grid.

Notorious for impressive starts, Garth did what he does best and jumped three places off the start and by the end of the first lap had gained another and settled in 7th position.  James was determined to move up the field too and gained two places at the start, positioning himself in 14th.

The battle was on in the early stages of the 70-lap race as Garth battled Coulthard for position and tried desperately to nudge past.   Courtney was the first of the HRT cars to stop for hard tyres and fuel, and a fast pit stop by the crew meant he was able to jump up one a position in pit lane.  Once all cars in the race had completed their first stop Garth was sitting comfortably in 4th and James in 7th.

A safety car on lap 21 for debris saw a number of different strategies come into play which mixed up the field.  Car #22 opted to stop for fuel but kept the hard tyres, already on the car, in play.  Meanwhile Garth stayed out on track, sticking with his two stop strategy.

With 25 laps remaining Garth and James were sitting in 4th and 5th respectively, hunting down the front runners.  As the laps counted down Garth made a move on Mostert and was in podium contention for the finish.  James followed suit overtaking Mostert on the same lap and moved into 4th.

It was teammate against teammate has the HRT boys battled for 3rd and with a faster car James was able to sneak past Garth.  It was eyes forward and with a four second gap to Reynolds James was determined to get to the second step of the podium.  With just three laps remaining James was not only hot on Reynold’s tail but passed and raced ahead to the chequered flag.

James now sits 6th on the V8 Supercars Championship ladder and Garth is placed in 7th.  The next stop on the racing calendar is Ipswich in three weeks.

Holden Racing Team Bounce Back for Strong Finish at QR